1
Skip to the end of the images gallery 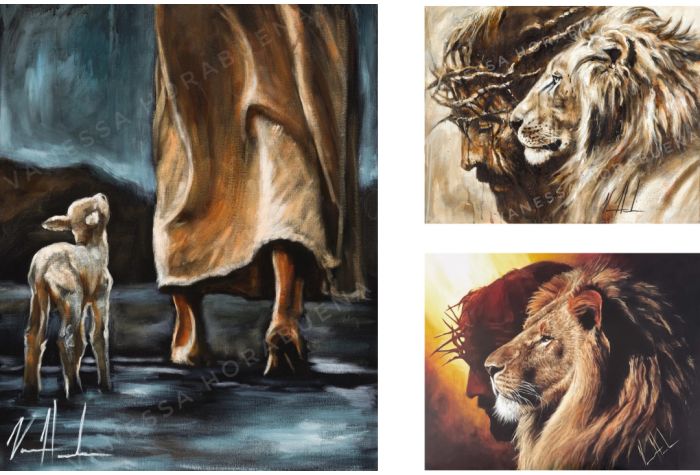 Heaven’s Grace
The light of the Father shone through like the sun, His love radiated the world. The heavens shook, as the barrier between man and God was broken. The power of the cross and the redemptive sacrifice of the Son made a way for all. For the least of us, for the lowest of mankind, those who never stood a chance, He paved a way directly to His heart. Those despised, the poor, the sick, the injured. His light, His sovereign love, broke all chains. He did this so that His power, His righteousness, His peace, would be available to those who believed. Not one was worthy, not one good enough, never the less He paid it in full, the ransom for all. Just so that we may know, and be One with Him. You are worth it to Jesus!

The Lion of Judah
“Then one of the elders said to me, "Do not Weep! See, the Lion of the tribe of Judah, the Root of David, has triumphed. He is able to open the scroll and its seven seals." -Revelations 5:5

My Sheep Listen to My Voice
“My sheep listen to my voice; I know them, and they follow me. I give them eternal life, and they shall never perish; no one will snatch them out of my hand. My Father, who has given them to me, is greater than all; no one can snatch them out of my Father’s hand. I and the Father are one.” - John 10:27-30

The Lion And Lamb Passover
The strong, powerful, mighty lion of Judah...and the meek, the gentle, and the innocent lamb of God. Both of these represent two aspects of Christ...and both of them shown through as He died on the cross for the sins of the world. It was His strength and His meekness, His authority and His innocence that shut death’s doors for you and for me. May this painting encourage you today. The Lord is fighting your battles for you.

3 Pack Bundle Contains 1 of Each: LION OF JUDAH, HEAVENS GRACE & MY SHEEP LISTEN